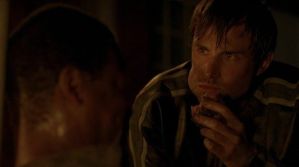 If you have not watched this last week’s episode, this post has spoilers, so please refrain from reading if you do not want to be spoiled.

This last week’s episode was filled with absolutely more blood and excitement. This season has so far been aiming towards more gore than some of the most recent seasons. Rick has finally come out of his farmer shell this season, and survival mode has been more real than ever so far. The group running into cannibals was expected, especially if you have read the comic books.

I expected Bob to be “Tainted Meat!” so to speak because, like I said in my last post a week ago, Dale (In the comics) was in the same situation. His leg was eaten by the Terminus people, and he had already been bit by the walkers. Now, for anyone that has read the comics and watched the episode, did you feel like there may have been something different about this scene? I don’t know if it was because I was expecting the craziness of Bob’s words, “tainted meat”, or because I simply felt like it was a forced line from the actor’s lips, but I just didn’t feel the intensity of the event like I did in the comic. Of course, if you’re expecting it to happen, it probably already ruins that part of the show.

As a viewer and reader myself, I feel like when they add a whole new story to the show it keeps me wondering constantly, and I feel like I’m at the edge of my seat. Now, when I know something is about to happen, it’s like that hope and wonder settles in my head all week, until the reveal that the show has stayed true to the comics. The only problem with sticking with the book, you already know what’s going to happen, so you’ve already been spoiled by the it. For me, if a scene doesn’t shock me, or make me get excited like it did when I first read about it in the book, then it’s a disappointment. As bad as this sounds, I was a little let down by Bob’s reveal. This is only because I already knew it was coming that he was bit by a walker.

The massacre and chopping of Gareth and his group was the highlight of this episode because we saw Rick return to his survival instinct mode. We all know Rick has no mercy for anyone that kills in a senseless manner. Yes, maybe Terminus was a sanctuary, but like Rick said at the end of season four. “They’ve screwed with the wrong people” That season finale really escalated what was to come and watching the downfall of Terminus was a beautiful sight to see. I actually had goosebumps watching Rick chop Gareth in a heap of meat with Michonne’s sword.

Who is with him? Is it Carol? Beth maybe?

The ever growing question of Beth continues to resound in our minds as we come closer to the reveal of who kidnapped her. Hopefully, the next episode will reveal more to this mystery for all of us, so we can rest easy on Sunday nights here on out.

Who has kidnapped Beth?

A) The Saviors/ Negan’s Group

The Walking Dead has yet again found a way to make us cringe! Great episode last night!! I hope you got a chance to watch it, if not read no further cause it’s SPOILER ALERT TIME!

In this episode, we find our group of survivors finding Gabriel and the church he resides in. I love how we have fallen back into the comic books and we can keep track of where we’re at in the show again.

Now here’s a question, can you trust a pastor that has “you will burn for this.” Engraved in the side of his church?

I’d say no but if you read the comics you’ll know the story behind Gabriel and probably nod with agreement to his actions.

Anyways, let’s move on. Who else wanted spaghetti after they saw the walker in the water attack Bob? Honestly, I think they’re doing okay effects wise, but sometimes I think they go a little over the top to the point where it’s comical. Anyone think Bob was bit? He seemed a bit worried and frightened after they escaped the walker spa.

And the ending, Gareth has returned and he is enjoying the fine dining of Bob’s leg. Could we be seeing someone else sufferinring what Dale suffered in the comics? Or will the producers turn the story in a different direction away from the comic? Who knows, but I sure was craving some kabobs after that lovely episode!

Would you eat someone to survive?

I was sitting down yesterday at work pondering what answers will be revealed tonight on the Walking Dead. Here are a few I thought worthy to post up here.

1. Will our group be wandering this season more than other seasons? We had the camp in season 1 in Atlanta, Herschel’s farm in season 2 (which was a snore.), we had the prison in season 3/4. I remember a little wandering near the end of four, but we found Terminus and already destroyed it. So are we headed for D.C. where the next community is just itching to open the doors for us? Or will we be delayed once again?

2. What’s going on in Rick’s head? I’m really hoping this is going back to a ricktatorship setting, but I’m more keen on Carol’s skills and willing to do what is necessary. Especially in tough situations. Will these two butt heads for leadership? I highly doubt it, but will there be discussions to avoid recent deaths and loses of the group.

(SPOILER ALERT FOR THE COMIC BOOK)

3. Will Rick find a new romantic interest? I find it funny no one has asked this. In the comic Andrea and Rick fall for each other once they are settled in at their next destination. The problem is she is dead in the show, so will he meet someone this season, next season, or ever again?

4. Is this Daryl’s last season? Oh man, I know fans would riot over this if it happened, but I suspect he will live long into the show until the last episode, which could possibly be the death of our beloved group.

5. Is Negan and the Saviors our next group of villains? If so, will we see what we saw in issue 100? I hope not, but I wouldn’t be surprised.

6. Does Eugene really know the cure to the apocalypse, or is he just another fanboy looking for attention/survive? This aggravates me because it seems like he is using the group to survive, which he did mention in the container earlier in episode one. So if he really doesn’t know the cure, what will be his fate?

I think being away from a closed community will make the show more exciting, but eventually it will have to happen. The Walking Dead will always need a living villain. Walkers are not enough to satisfy viewers. As bad as this sounds, the walker deaths are starting to get a bit repetitive and cheesy. The story is the only thing peaking my interest.

I think we can all agree there’s much to come, but who will be next to die this season? Will it be:

Any predictions on tomorrow night’s episode? Or maybe even a sporadic yelp of awesomeness by fans of the Walking Dead?

Anyone else get all antsy about the season five premiere of The Walking Dead?

Judging by this photo, Glenn seems to be in a bit of a bind.

I would just like to point out that this blog will have plenty of spoilers, and discussions about upcoming episodes as well as recent episodes for all the blood thirsty Walker obsessed fans out there. If you haven’t watched the recent episodes, you may want to turn away until you get a chance to go through them because like I said before, there will be spoilers in all of the posts here on out.

If you watched last weeks episode, our beloved characters are bound and placed against a tub, where these men from Terminus bash the back of their heads and slit their throats. Don’t worry though, none of our characters die, only the poor extras that have to be used as puppets to show the extent and danger Rick’s group is in.

First I want to point something out though, anyone notice the first guy that was drained?

Could that be Penguin from Gotham? Yes, it is!!!

At first I was a little curious as to wonder why this actor looked so familiar, but after watching the Talking Dead, they revealed his identity. Thank you, Greg Nicotero for being an awesome director and tossing this guy into the show. Even though no lines were used. His expressions definitely spoke more than words.

I will say there is one character I’m a tad bit disappointed in, and that is Tyrese. In the comic book, he was such a bad ass character and in the show, he seems to be a little timid. He also has not killed anyone living yet, until this episode. Now that he has killed, will he be less merciful towards his new foes down the road to Season 5? Or will he be more reluctant to kill someone that isn’t as merciful as he?

Who got chills when Rick finally came out of his farmer shell, and said, “Kill them all!” I really did get extremely excited seeing Rick finally come out of his roots and vegies phase, and return to Ricktatorship mode! Although I love Rick, I sometimes wonder if Carol could be a better leader than him. In this episode, she really stepped up to save her friends, and destroy Terminus. So during the aftermath of all of this destruction in Season five’s premiere, will we see Carol take more control of the group? Will Beth be a live somewhere in the realm of Walkers? And what is Morgan doing wandering around near Terminus in his cloak? Many questions I can’t wait to have answered.

If you have anything you’d like to discuss about the first episode, leave a comment below. I’ve tried to hit a few key points in this post, but I’d love to hear your thoughts about the episode.